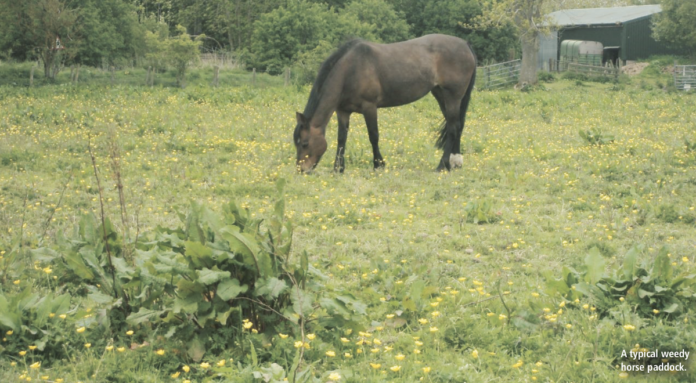 While horses relish grazing pastures filled with a mixture of plants, weeds such as ragwort, docks, nettles, buttercups and thistles are not to be encouraged, says Andy Bailey.

Weeds need managing for many reasons. Some, like ragwort, are very poisonous to horses; other such as nettles will take over a paddock so there is no grass left to eat.

The Weeds Act 1959 requires that if an order is served on them, landowners have to control common ragwort, broad-leaved and curled docks and spear and creeping thistles.

The Ragwort Control Act 2003 strengthens this by placing onus on the occupier to take action where ragwort poisoning poses a serious risk to grazing animals.

Common ragwort should not be tolerated in horse pastures. The plant contains an alkaloid – a cumulative poison which, when grazed over a long period of time, affects an animal’s liver. As little as 20kg taken over the lifetime of a 500kg horse can be fatal.

Horses will not usually eat ragwort while it is growing – but when it has been cut and has wilted it becomes much more attractive and palatable. Grass fields with growing ragwort should never be cut for hay.

Digging out whole plants by hand - wearing gloves, when the soil is moist in spring, can get rid of an infestation. All pulled plants must be removed from the field.

Where there is too much ragwort to pull by hand, high levels of control can be gained by spraying with a modern, translocated herbicide. This must be done when the plants are still at their vegetative stage and actively growing. Do not wait until the plants are flowering, as this is too late to spray to achieve good control.

It is essential to ensure all the remains of all ragwort plants have completely decayed before reintroducing horses.

Docks like to grow in nutrient-rich soils and are often found in latrines – the areas where horses regularly urinate and defecate. They are deep rooted and spread easily as every mature plant can release up to 60,000 viable seeds each year.

Once established, docks can withstand a high amount of trampling, which is another reason why they are so commonly seen in horse fields. They are not poisonous to horses but are less digestible and palatable than grasses.

Never top docks as a means of control, as this does not affect the large taproot and the plant will regrow energetically after cutting.

The best way to get rid of docks is by spraying with a selective herbicide that will kill perennial broad-leaved weeds without harming any grass species present. These should be applied when the plants are dinner-plate sized and actively growing but not flowering.

Nettles also like to grow in horse latrines, as they are phosphorous-loving. They can form large ‘nettle-beds’, which block out light to the ground and stop any other beneficial plants from growing.

Nettles can also be sprayed with a herbicide though a knapsack sprayer or weed wiper, as they often grow above the level of the surrounding vegetation, or boom sprayer off an All-Terrain Vehicle (ATV) or tractor.

It is important to reseed any bare areas of ground left after the weeds have died and been removed, so that new weed seeds do not come in and germinate in their place.

Buttercups are poisonous but taste very bitter, so horses will not eat them unless there is nothing else growing. Unlike ragwort, they lose their toxicity as they wilt and dry, so they are not a problem in fields cut for hay.

Having buttercups growing is often a sign of wet soils and improving drainage can reduce their growth. Small patches can be dug out by hand. Larger areas can be sprayed using a herbicide early in the season. Once the buttercups have flowered it is too late to spray for optimum control.

There are many different species of thistle, but the most common are creeping and spear thistles. Having thistles growing in a field is unsightly and when they are releasing seed, this can spread the problem to neighbouring fields.

They also reduce the amount of feed growing in the field because where thistles grow, grass cannot grow.

Topping thistles has minimal effect and they tend to regrow. Spot-treating small areas with a herbicide through a knapsack sprayer or spraying larger areas using a tractor mounted/self-propelled sprayer, are the best options. These must be applied early in the season, when the plants are in their vegetative stage with no flowering stems present.

There is a range of selective herbicides that will kill perennial broadleaved plants in a field, but not the grass species. If the sward includes desirable broad-leaved species, use an alternative method of control to spraying.

Modern, translocated products provide the longest lasting control, as they enter the plant and circulate around it – from the top of the leaves to the bottom of the roots, which kills the plant from within.

Some are formulated to tackle particular weeds like docks, while other broad-spectrum products work well on several different weeds.

Before a field is sprayed, the animals must be removed and kept out for however long the stock withdrawal period says on the product label.

This grazing interval, which can be as short as seven days for some products, is a legal requirement and anyone putting horses back into the field before the stated time is breaking the law.

To allow the products to work to their best potential, users should respect the advice given on the label, which may allow for a longer period without animals in the field so the herbicide can do a good job. These statements are advisory, but the stock exclusion is mandatory.

Where treated fields contained ragwort, make sure every last bit of wilted or dying material has completely decayed before the animals return.

The law now states that anyone who applies professional use pesticides must possess a valid pesticide certificate in order to comply with regulations.

Many paddock owners contract out their spraying to local certified farmers or contractors. For those who wish to carry on spraying themselves, for instance with a knapsack, they also need to complete a City and Guilds/National Proficiency Test Council (NPTC) course, such as PA1 (theory module) and PA6 (handheld lance or knapsack). The City and Guilds Level 2 Award for the Safe Use of Pesticides Replacing Grandfather Rights is another option for those born before 1964. It is a quicker and easier path, but is only available until the end of 2018.

There are more details at www.nptc.org.uk.