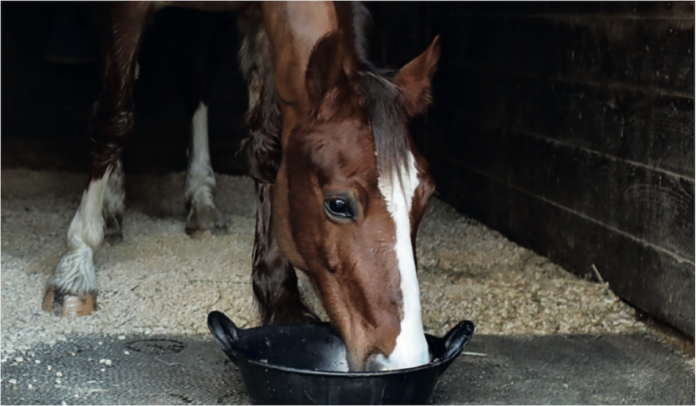 Horses evolved to ingest a high fibre, low starch ration on an almost continual basis. Foraging behaviour is important to the maintenance of a healthy digestive tract, as not only does the flow of forage through the digestive system ensure optimal digestive health but the chewing process produces large amounts of saliva, which helps to buffer the acid that is produced in the stomach.

The way in which we keep and manage horses often means that they are unable to exhibit this normal foraging behaviour and are exposed to high stress levels such as during training or early weaning, as well as being fed rations that may have high cereal and starch levels with less than optimal forage and fibre allowance catered for. These feeding and management practices have been associated with a high prevalence of Equine Gastric Ulcer Syndrome (EGUS).

EGUS is a term that is used to describe ulcers in the terminal oesophagus, non glandular and glandular regions of the stomach and the proximal duodenum. It was thought to more commonly affect Thoroughbred racehorses, but with the advancement of research and increased ability to be able to study other classes of horses, EGUS has significant prevalence in other classifications of performance horses e.g. show horses, eventers, dressage and endurance horses. The common factor amongst these horses is that they are more likely to have reduced turnout, receive a lower forage intake and are exposed to higher stress levels due to more frequent travel and competition, and are therefore also more likely to have irregular feeding patterns.

However, it is also becoming more apparent that EGUS can also affect leisure horses and we are certainly now dealing with far more ‘leisure’ cases via our feed helpline. It has also been seen that all ages and breeds of horses and ponies are susceptible to EGUS.

Prevalence of glandular mucosal lesions is certainly increasing as expertise in the use of the endoscope rises and the lower part of the stomach is investigated more thoroughly. Glandular lesions are thought to result from impaired mucosal defence mechanisms rather than a primary peptic or acid injury. This is supported by the observation that feed deprivation models used to create squamous injury do not produce glandular lesions.

Glandular lesions can be successfully induced in horses using excessive administration of non-steroidal anti- inflammatory drugs, and there is increasing evidence of a bacterial component to glandular ulcer development.

The clinical signs of EGUS can vary from horse to horse and can also be a reflection on that individual horse’s temperament. Some horses will show more outwardly obvious signs with mild ulceration while others may show limited signs even in the presence of substantial ulceration. Personal observation has shown that horses with glandular lesions tend to have less tolerance to glandular ulcers than squamous ulcers.

The only reliable method of diagnosis is by use of the endoscope. For this procedure to be carried out successfully feed needs to be withheld for 12 hours to allow for sufficient gastric emptying. A scoring system is

used to score the lesions according to the number of lesions and their severity.

Your vet is the best person to discuss treatment protocols with, but generally the treatment involves the use of medications such as Omeprazole and coating or binding agents to help protect the stomach lining.

NUTRITIONAL MANAGEMENT TO REDUCE THE RISK OF EGUS

ABOUT ETN’S RAMA/SQP FEATURES
ETN’s series of CPD features helps RAMAs (Registered Animal Medicines Advisors/SQPs) earn the CPD (continuing professional development) points they need. The features are accredited by AMTRA, and highlight some of the most important subject areas for RAMAs/ SQPs specialising in equine and companion animal medicine.