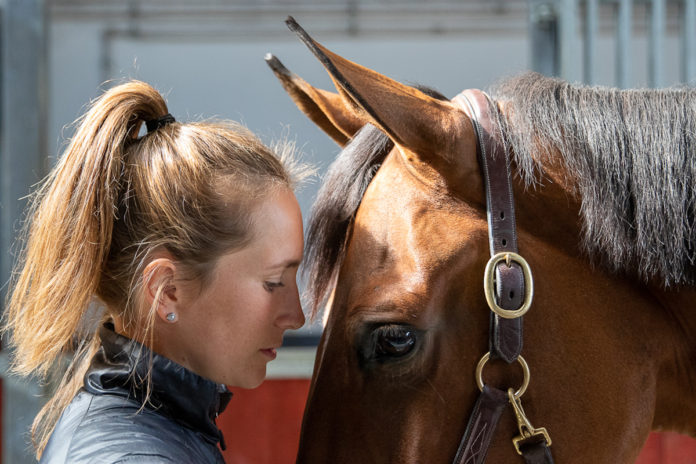 Pony owner is ‘truly gobsmacked’ by this product.

It was like someone had flicked a switch on my pony, writes ETN editor Liz Benwell.

My first encounter with NAF Oestress has left me truly gobsmacked.

But to re-wind… My little mare is a good pony; safe, sound and sensible and not at all naughty.

However, as soon as Spring comes, any excuse and her tail goes up, back arched and she’s weeing. She’s a big flirt…

When we go out for a ride, we pass a field of four very handsome section B geldings. I call them the ‘boy band’ and they get her very ‘turned on’ indeed. You can smell the results at 50 paces…

Thing is, it was all getting a bit embarrassing.

A friend suggested Oestress and I asked NAF, the manufacturer, if they thought the supplement would help. “Why not give it a try?” they said, and sent me a bottle of the liquid version.

Well, after five days on Oestress (25ml per day) she was the same pony as she is in winter. Completely non-tarty.

I couldn’t believe it, so I repeated the same routine on day two. Saddle on and mounted (no arched back); rode past the boy band (tail down, no weeing).

I had been reluctant to give my mare something that falls into the ‘calmer’ category for fear it would dull her. In fact, it’s taken away the undesirable mareish behaviour and kept everything that’s good about her.

NAF supplied a one litre bottle of Oestress for free. I now buy my own at full RRP from a retailer.

MARES AND THE OESTRUS CYCLE

ETN asked Kate Hore RNutr(Animal) Nutritionist at NAF to explain more about mares and their seasons.

We all know ‘girl power’ can be world beating, but owning a mare can be challenging, as many of our customers tell us.

Bucking, napping, biting, refusing fences can all make life difficult, and have significant effects on riding and competition results. Why are mares so tricky, and how can we help mare owners harness her spirit without the downsides?

Of course, mares are ‘entire’ animals, just as stallions, with all the hormonal challenges that brings. Just as we expect stallions to sometimes be highly strung, then the same can be true of mares.

For example, in the wild, the boss of a herd is usually an older female, known as the ‘alpha mare’ who can certainly assert her dominance despite not being physically as strong as the stallion.

For mares, hormonal behaviour usually follows a pattern, from roughly March through to November, when they usually cycle every twenty-one days, through that season.

A mare’s cycle is split into ‘oestrus’, four to five days when she is sexually receptive, and signs include ‘flirting’, raised tail, urination stance and urine with a distinctive aroma. An aroma which the stallion recognises as an in-heat mare, and will often be greeted with the Flehmen response, where he curls back his top lip to analyse the pheromones of the urine.

Oestrus is followed by ‘dioestrus’, sixteen days when she would reject the stallion’s advances, and signs here include aggression and attitude.

‘Anoestrous’ describes the non-breeding season over winter. Mares’ seasons are open to individual variation, and can also be altered by human intervention – either knowingly or unwittingly.

It can be advantageous to have foals born early in the season. This is particularly true for Thoroughbreds where an arbitrary date of 1 January has been traditionally set as the ‘birthday’ of all racehorses, meaning breeders aim ahead of the natural season.

As mares’ seasons are controlled by photoperiod, using light treatment to advance breeding season in mares has been used for decades, with ovarian activity seen six to eight weeks after lighting is introduced.

If customers’ mares seem to cycle all year, one thing to think about is stable lighting to ensure they’re not inadvertently extending her season. For example, a busy livery yard where stable lights are switched on at 6am and go off at 9pm, could easily fool mares’ hormones into thinking Spring has sprung!

Obesity increases unwanted behaviour, but also can extend the breeding seasons in mares; so not only worsening, but also lengthening the time that seasonal behaviour is seen. Therefore, mare owners should ensure their horse is ‘fit not fat’, to keep her seasons natural and comfortable.

For mares, the challenge of oestrus is compounded by her anatomy, as the ovaries sit just behind and down from the saddle, and often she will show discomfort associated with that area.

For example, the mare who swishes her tail, or is more sensitive to grooming over the quarters is likely experiencing cramping and muscle tension in the area, which will impact her ability to engage her quarters and back effectively.

For disciplines such as dressage and showjumping, where engagement of the quarters is so important, this can be a particular challenge for both the mare and rider.

Working to improve a mare’s comfort can clearly make a huge difference to her performance throughout her seasons, and targeted nutrition can be part of that support.

Magnesium is commonly used as nutritional support for mares, through its role in maintaining relaxed muscles, so enabling her own system to naturally relax.

However, magnesium rarely works alone, so advise a nutritional complex combining magnesium with natural herbal elements, such as NAF Oestress.

Herbs’ common names often tell you something about their action.

Vitex Agnus Castus, also known as ‘Monks Pepper’, was used historically in monasteries to keep the monks focused on their work and not turning their minds to less scholarly matters!

Not just for monks, Vitex, also known as ‘Chasteberry’, can be just as successful in our mares too, to maintain hormonal balance, delivering calm, focused behaviour, and works beautifully in synergy with herbs such as Crampbark, a herb traditionally used for comfort in women through their oestrus cycle.

Ultimately, we have to respect that seasons are a natural characteristic of our mares. As any mare owner knows, she can bring more highs than lows.

With good management and NAF Oestress, we can work with our mares to keep them focused and comfortable, so allowing the natural ‘girl power’ to put those geldings in their place.