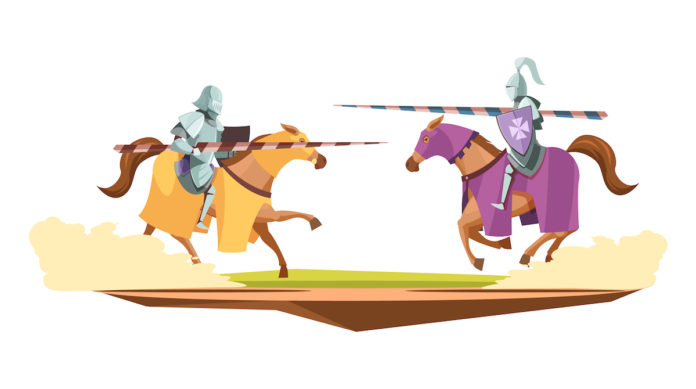 This saddler is as much at home in a film studio as the workshop.

Jason McCabe has been named ETN/SMS Bench Saddler of the Month for October.

Jason was nominated by Lucy Cushley who says: “Jason runs Hampshire based Leather Designs. He is a Master Saddler and long-standing member of the SMS.

“The main focus of Jason’s work is the film industry. He’s a shining example of what a saddler can do – and how a career in saddlery isn’t only about making saddles and bridles for horses.

“Jason has been involved with many different films including Mary Queen of Scots and Star Wars. Has an outstanding skill-set and knowledge of different periods in history, how the movie industry operates and prop-making.”

“I’ve liked making things for as long as I can remember,” says Jason who admits to being “a bit of a perfectionist.”

This talented saddler from an equestrian family learnt to ride before he could walk. “I’ve always been around horses. My mother kept horses and worked in a polo yard, my brother had heavy horses, and my sister has many horses,” explained Jason.

His career in the trade began with work experience for a saddler in the village where Jason lived. “As I was already learning to make tack, it seemed like a natural next step. When I left school, I got an apprenticeship with another saddler and went from there.”

Jason’s business, Leather Designs, started as a conventional saddlery business 21 years ago. Since then, it’s slowly shifted more towards working within the film industry.

“I now specialise predominantly in this field,” says Jason. “I have a permanent workshop based in Hampshire with a small team of amazing saddlers, but we relocate regularly to film studios around Europe.”

Looking back on the various projects with which he’s been involved, Jason says he doesn’t have a favourite. But rather he enjoys the creative process of coming up with something new “because of the mental challenge designing provides.”

A sense of achievement, he adds, comes with the designing as well as the making of a product.

“A couple of things which stand out from recent years are a full bridle, saddle and trappings set for one of the horses in the film Maleficent II – which was a joint effort.

“The other was the polar bear saddle from Huntsman, which I designed and made to a brief.”

“Because I’m a specialist in saddlery for the film industry, I get the chance to make all sorts of things that you wouldn’t usually get to make as a saddler,” says Jason, “and that’s the best part of the job.

“The worst thing is having to answer all my emails myself as I don’t have a personal assistant.”

Asked about the weirdest item he’s ever been asked to make, Jason quips: “Making unusual items is my normality! We’ve made everything from dinosaur harnesses and a giant’s hobnailed boot to medieval horse armour and Captain America’s belts.”

Outside work, Jason enjoys “anything to do with engines; boats, race cars, making more stuff - and drinking gin.”

Everyone is invited to nominate bench saddlers they feel deserve to be named ETN/SMS Bench Saddler of the Month. Candidates for the award must be members of the SMS and based in the UK or overseas. They can work in a factory or workshop setting, for an employer or self-employed.