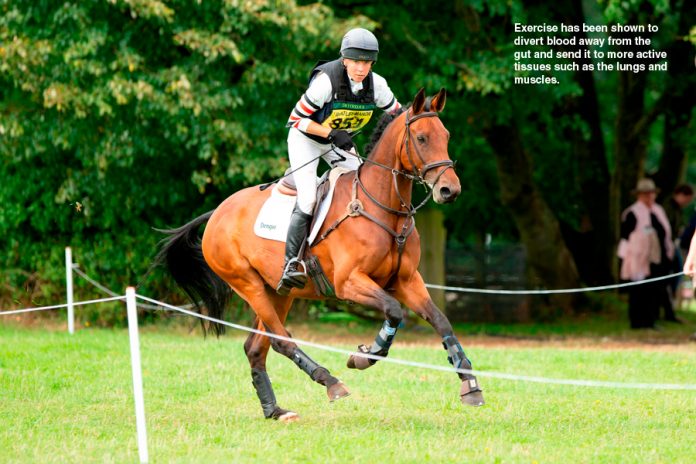 The health of the digestive system

It is now widely accepted that the digestive system is not just a means of providing nutrients to the rest of the body, it is also an important part of the immune system and what goes on in the gut can have a significant impact on mood, behaviour and general well-being.

The gastrointestinal tract provides a barrier against harmful organisms and substances and research increasingly suggests that when this barrier breaks down, problems such as Equine Gastric Ulcer Syndrome (EGUS) and laminitis occur.

Clearly it is important to maintain the integrity of the barrier to keep both the gut and the animal healthy. We therefore need to understand more about what the barrier consists of and the factors that contribute to its failure.

Figure 1 highlights the three components of gut health proposed by Conway (1994). All three factors interact with one another and in the healthy animal this interaction facilitates the digestion and absorption of feed as well as an effective immune function. The animal should then thrive and be able to perform at its best. We will look at each component to understand how we can feed and manage horses with gut health in mind.

In simple terms the gut tissue has to be permeable to nutrients and impermeable to anything harmful to stop it reaching the body and causing disease. The intestinal epithelium (lining) consists of a single layer of cells which are joined tightly together.

When the junctions between these cells are compromised the gut becomes more permeable or leaky and the term “leaky gut syndrome” is increasingly being used to describe this phenomenon.

Some of the factors thought to compromise the integrity of the epithelium include stress, disruption of blood flow to the gut tissue such as during exercise and increased acidity levels in the gut which is related to diet.

Exercise has been shown to divert blood away from the gut and send it to more active tissues such as the lungs and muscles. Ponies undergoing maximal exertion on a treadmill were found to have significant reductions in blood supply to the pancreas, small intestine, and colon, among other organs (Manohar, 1986).

More recently, researchers have found that performing exercise more than 4 or 5 days per week is a risk factor for Equine Glandular Gastric Disease (EGGD) (ulcers in the glandular region of the stomach) in racing Thoroughbreds (Habershon-Butcher et al, 2012) and show jumpers (Pedersen, 2015).

This lends weight to the belief that a contributing factor to EGGD is the disruption of blood flow to the stomach resulting in a breakdown of the natural protective mechanisms present there. Providing at least 2 rest days a week has a protective effect against EGGD which may be partly because the blood supply isn’t being diverted away from the stomach as often.

In the glandular region of the stomach there are 3 regions:

• Cardiac - has no parietal cells (those that produce acid) but produces mucus and acts as a sensor - once acid reaches this area of the stomach a signal is sent to indicate enough acid has been produced.

Levels of acidity in the whole of the equine stomach range from pH 1.6 to 6.5 with the more acidic conditions in the glandular region. Feeds containing higher levels of starch increase acidity in the stomach and so are not desirable when trying to reduce the risk of gastric ulcers. A low starch content compared with other similar feeds is one of the criteria required by the BETA approval mark for feeds suitable for horses and ponies prone to EGUS.

The population of microorganisms in the gut varies due to factors such as diet, age, stress and environment. Fibre digesting bacteria tend to thrive in a less acidic environment – the volatile fatty acids (VFAs) produced from fibre fermentation are relatively weaker acids than the lactic acid produced when starch is fermented by bacteria.

Several of the general rules of feeding relate to the impact that diet and feeding management can have on the microbial population. For example:

• Feed little and often – large meals of cereal based feeds can’t be digested and absorbed fully in the small intestine and so reach the hind gut where the majority of the microbial population reside. The starch is broken down quickly and creates a very acidic environment which the bacteria don’t like

A study by Respondek et al (2007), investigated the effect of feeding short-chain fructo-oligosaccharides (scFOS) also known as prebiotics to healthy horses. The stomach was the region of the digestive tract where the effect of the scFOS was greatest with a higher number of total bacteria present and a higher pH meaning the stomach was less acidic. By stimulating the bacteria that utilise the stronger lactic acid, the scFOS appeared to help regulate acidity.

Some feed materials may also help to regulate acidity as they contain minerals and other substances that buffer or neutralise acidity. Lybbert et al (2007) found that the inclusion of alfalfa compared to Bermuda Grass hay reduced the severity of ulcers in horses. It is believed that the relatively abundant levels of calcium and amino acids in alfalfa are what act as buffers in the digestive system.

The role of diet in promoting gut health is clearly an enormous topic but an area of recent interest is the importance of fibre and its impact on the mucus layer. It is important to stress that research to date is largely in other species. One such study by Schroeder et al (2017) explored the functional interactions between dietary fibre, the gut microbiota and the mucus barrier in the colon. The study was investigating human health using mice that had been inoculated with a human microbial population in their digestive systems.

The results showed that if insufficient fibre was supplied over the short and long term, the microbiota resorted to using the mucus lining the gut as a nutrient source, resulting in the reduction of the mucus barrier in the colon. The researchers suggested that the damage to the mucus layer potentially allows harmful bacteria greater access to the gut tissue and therefore more opportunity to cause harm or disease. In the horse, the reduction in the mucus layer brought about by a low fibre diet may increase the risk of leaky gut syndrome.

Clearly this study can only provide an indication as to the potential importance of fibre in the equine gut but as further research is carried out it may identify even more reasons to ensure horses are fed high fibre diets.