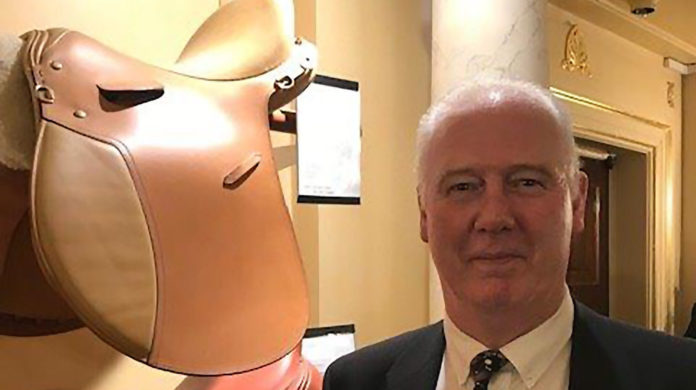 It’s been a good year for top saddler Keith Richardson.

Not only did he take a premium award in the open saddle class at Society of Master Saddlers’ National Saddlery competitions, he’s also been named ETN/SMS Bench Saddler of the Month.

Keith was nominated for the latter by Victoria Coleman of Walsall based Frank Baines Saddlery.

Victoria said: “Keith has worked in the saddlery industry for 47 years. He has been with us for 32 years, making him our longest serving saddler.

“During his time at Frank Baines Saddlery, Keith has been instrumental in designing new saddle models and patterns. He also plays a key role in managing the quality of craftsmanship.”

It was by chance that Keith embarked upon a career in saddlery.

As a 15 year old from Walsall who’d just left school, he was taken to visit the Blue Ribbon Company, a saddlery firm owned by a friend of his father’s.

“I’m not from an equestrian background; my father was a carpenter and my mother a secretary,” said Keith. “But when I visited the saddlery that day, I was fascinated by the skills and processes involved.

“There was a vacancy, and they took me on. The rest, as they say, is history.”

Another of Keith’s awards came when he won Saddle of the Year for an all-in-one skirt and flap design. That was 25 years ago, but the saddle remains on display in the Worshipful Company of Saddlers’ headquarters in London.

Today, he’s keen to see young people coming into the trade, bringing fresh ideas with them.

Having lived in Walsall all his life, Keith hopes future generations will treasure the leather and saddle-making skills that have for so long shaped town’s economy.

“It’s part of our local heritage and social history, so it’s important it’s documented and remembered for future generations,” he said.

The ETN/SMS Bench Saddler of the Month award recognises those whose good practice is making a difference the saddlery industry.

Everyone is invited to nominate bench saddlers they feel deserve to be named ETN Bench Saddler of the Month. Candidates for the award must be an SMS member and based in the UK or overseas.