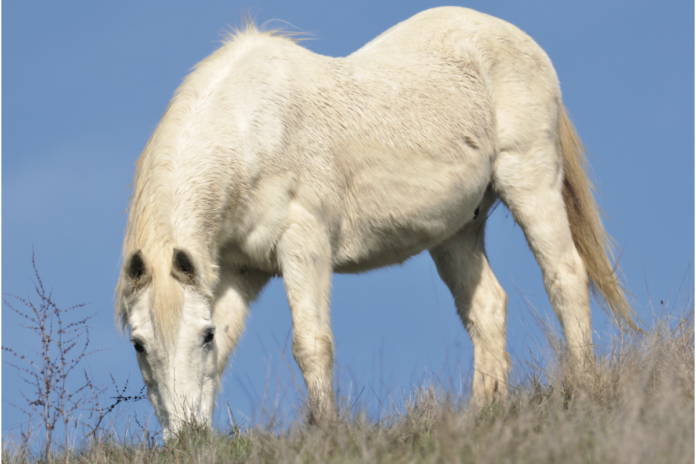 CPD points in a given period of time in order to retain their qualification. RAMAs/SQPs who read this feature and submit correct answers to the questions below will receive two CPD points. For more about AMTRA and becoming a RAMA/SQP, visit www.amtra.org.uk

The discovery of Cushing’s Syndrome dates back to 1932 when neurosurgeon Harvey Cushing described a link between typical physical characteristics and a tumour of the pituitary gland.

First recognised in people, Cushing’s Syndrome can also affect pets (dogs more so than cats), but it is most usually with our equine customers where we find ourselves discussing Cushing’s.

The clinical name is Pituitary Pars Intermedia Dysfunction (PPID), which describes a disruption in normal function of the pituitary, at the base of the brain, whose predominant role relates to hormone control throughout the body.

With an ageing equine population, care of the older horse and pony is an ever-growing area of welfare. Knowledge of PPID is useful in store, to allow us to advise owners of older equines correctly.

Age is a clear risk factor for Cushing’s. While its prevalence in the general equine population is less than 3%, estimates for incidence in equines above 15 years are around 21%. However, a recent mortality study in the Netherlands found nearly half of older equines (>15yrs) had PPID.

Often the signs of Cushing’s can be confused with general ageing, and this may, at least in part, explain why owner-reported prevalence of PPID in older horses is much lower than veterinary diagnosed rates.

Therefore, when advising owners with older horses, it is useful to recognise the signs so we can discuss PPID and suggest they consult their vet.

Signs of Cushing’s Syndrome in equines

Changes to coat condition are often what the owner associates with Cushing’s, though mild changes in the early stages can be mistaken for general ageing.

Muscle wastage and atrophy (shrinkage) of the neck, back and hindquarters is positively associated with increasing age, which could be due a number of reasons including simply a change in their exercise regimes. However, we also see muscle changes as linked to PPID, and so a change in topline might not be due to old age alone.

Improving owners’ ability to recognise those early signs will help early diagnosis and welfare, as often it is the more severe signs, such as laminitis, where owners are first aware.

Development of a scoring system for muscle atrophy, similar to body condition scoring, is currently ongoing, and is encouraging as a potentially reliable, easy to use, method for owner assessment of older horses.

Further to clinical signs, veterinary diagnosis is usually via a basal adrenocorticotrophic hormone (ACTH) blood test, often repeated for confirmation and monitoring. However, variability in test results, particularly seasonally, is recognised, with normal references ranges being higher in the autumn.

A thyrotropin-releasing hormone (TRH) stimulation test can be more accurate, though not routinely done due to increased costs and potential for transient side effects noted with intravenous TRH administration. For this reason, the TRH stimulation test is usually reserved for horses with borderline results, where the owner is wanting further clarity.

Once diagnosed, veterinary treatment of clinical signs is through daily oral administration of the dopaminergic agonist, Pergolide, and is life-long. However, owner compliance is poor, with a recent study showing administration compliance in less than half of PPID cases studied.

Compliance was lowest in owners of geriatric horses (26yrs+), and generally closely associated with age, reflecting an unwillingness of owners to give long-term medication to older horses and ponies. Poor compliance is not unusual in equine medicine, with owners often preferring to look for natural or dietary approaches.

Targeted dietary support may be recommended, and can be advised alongside veterinary approaches.

Gut support is useful as weight loss is a relatively common sign, reported in approximately one third of veterinary examinations. Additionally, as knowledge of the vital role of the microbiome and gut-brain axis in both behavioural and neurological disorders across species grows, then it makes sense to support the hindgut with prebiotics and live probiotics in all older animals, but particularly where dysfunction, such as PPID, has been recognised.

The clinical sign of depression is often one of the most upsetting signs for owners, and being able to support that through the diet, the author personally finds very rewarding.

Adaptogenic herbs, such as Siberian Ginseng and Omicha can also be useful in this respect, as adaptogens literally help the body adapt, and are particularly interesting in age related changes.

One such herb, Gynostemma, appropriately also known as ‘immortality herb’, is of particular interest for equine PPID, as its actives combine adaptogenic roles with insulin regulation, which itself is often linked to laminitis and PPID.

Perhaps the best-known herb for Cushing’s is Chasteberry, or Vitex agnus castus, recognised for its endocrine actives, particularly dopamine related compounds, of relevance to PPID as it is a dopaminergic neurodegenerative disease.

However, results are contradictory, with a trial of 38 horses reporting an improvement in signs, particularly coat and behaviour, while another trial (n=14) showed no improvement. Further research is needed to fully understand which actives are the clinically important compounds, at what levels, and how they are best given.

As with so many physiological conditions, PPID is complex and it is the authors’ opinion that a combined approach, which provides key herbs, alongside other dietary approaches, such as gut support, adaptogens and antioxidants, is generally more effective than any single ingredient strategy.

In conclusion, we can see PPID is an important condition of ageing horses and ponies, and knowledge of the condition will help you better advise owners of older equines.

The horse owner should always be advised to consult their vet if Cushing’s is suspected, but suitable dietary support can prove a useful adjunct to pharmacological approaches.

ETN’s series of CPD features helps RAMAs (Registered Animal Medicines Advisors/SQPs) earn the CPD (continuing professional development) points they need. The features are accredited by AMTRA, and highlight some of the most important subject areas for RAMAs/ SQPs specialising in equine and companion animal medicine.