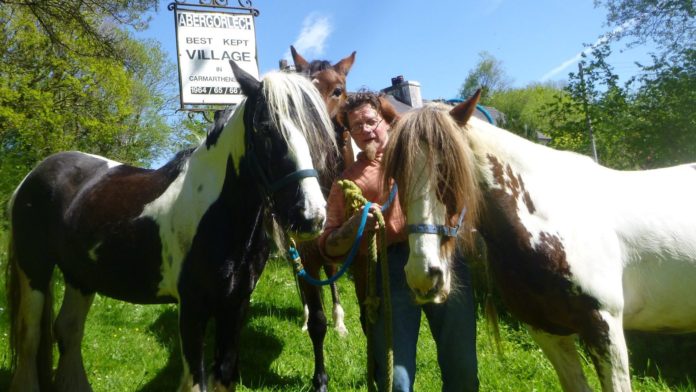 West Wales based Tim Cook has been named ETN Bench Saddler of the Month for October.

This award, presented in conjunction with the Society of Master Saddlers (SMS), recognises those whose good practice is making a difference in the saddlery industry.

Tim was nominated by his partner Sam McDermott, who jokingly describes herself as a “workshop widow.” She’s also full of praise for his skills.

“He goes the extra mile for his customers by creating things that no-one else does. He even makes the harness trees and harness from scratch.

Tim is totally dedicated to his craft and passionate beyond belief about all things equestrian. He is solution focused, tenacious and dogmatic - and this shines through in everything he does.”

Tim began working with saddlery when he started riding at a trekking centre – and instinctively began repairing broken tack.

Although almost entirely self-taught, he went on to take formal qualifications in saddlery and harness making at the Saddlery Training Centre.

Now, Tim and Sam run a trail riding centre with an on-site saddlery workshop near Lampeter. Their combined businesses are known as Saddle Tramps.

Tim uses traditional saddlery and harness-making methods. “Docks and shaft tugs are probably my favourite things to make,” he says. “I’m proud of every item that leaves the workshop - it doesn't make it out the door otherwise!

“I particularly enjoyed making a black patent and tan set of show wagon harness for a beautiful Welsh section D stallion to debut at the Royal Welsh Show.”

Some of the more unusual items Tim has been commissioned to produce include falconry hoods and a motorcycle seat.

When he’s not in the workshop, Tim is out on the trails guiding riders across the stunning local countryside. As well as residential riding holidays, Saddle Tramps offers leather craft workshops.

To nominate a bench saddler…

If you know a bench saddler you feel deserves to be named ETN Bench Saddler of the Month, let us know who they are and where they work at editor@equestriantradenews.com. Candidates for the award must be SMS members who are workshop or factory based, employed or self-employed in the UK or overseas.