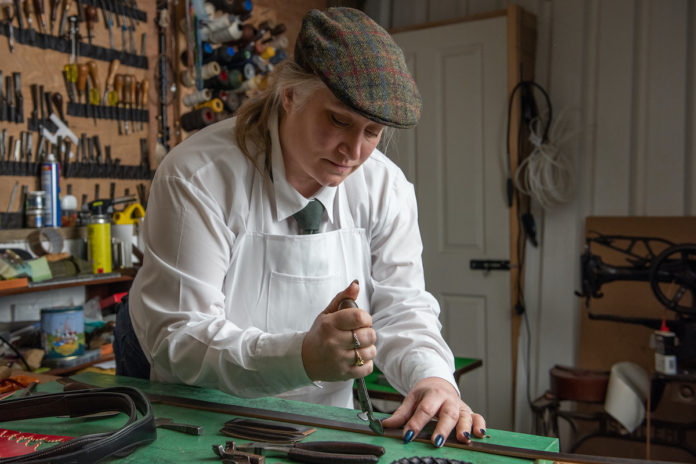 How a chance meeting with a world-famous side-saddle exponent changed an aspiring saddler’s life.

Tiffany Parkinson has been named August’s ETN/SMS Bench Saddler of the Month.

The award, presented in conjunction with the Society of Master Saddlers (SMS),recognises those who uphold the highest standards of leather craft skills.

Tiffany was nominated by Master Saddler Catrien Coppens who says: “Tiffany works for E J Wicks in Lambourn and also freelances. Much of her work is for the racing industry, but she’s also a very good side-saddle maker.

“Tiffany has won the best side-saddle title at the SMS National Saddlery Competition and has come up with some amazing creations in leather – including a red aeroplane and shield with sword – for the President’s choice class.”

Ever since she was given her Nan’s old hand-sewing machine to make dolls’ clothes as a little girl, Tiffany has been making things.

Her passion for working with leather started when she was eight.

“My uncle was a saddler and I used to scrounge scraps of soft leather from him to make saddles and bridles for my Sindy horse,” she says. “Leather quickly became my favourite material; it's so tactile and comes in such a wide variety of textures, colours, weights and feel.”

Although her aunt had horses, Tiffany’s first connection with them came via a careers evening at her senior school. Among the people available to speak to the teenagers about potential life choices was riding school proprietor and side-saddle doyenne Betty Skelton.

The chance meeting led to Tiffany becoming a ‘weekend girl’ at Mrs Skelton’s Harroway House stables in Hampshire. “I earned rides by helping,” she recalls.

“The tackroom was my favourite place. The smell of the leather, the cleaning products, the stories the other girls would tell, saddles on racks, side-saddles carefully stashed on saddle horses, trunks of oddities from days gone by – we used to try to guess their purpose.”

Indeed, it was that magical tackroom that inspired Tiffany to pursue a career in saddlery.

Her uncle had moved to American by now, so she wrote to Winchester based saddlers Calcutt and Sons to ask if they would consider a totally unskilled trainee on a youth training scheme.

“I worked there for two-and-a-half years and gained a pretty solid basic saddlery education,” says Tiffany who simultaneously attended a two-year new entrants’ training course at the Rural Development Commission, then run by Mark Romain.

Another saddlery luminary subsequently crossed her path when Tiffany went to work with Kay Hastilow in the early 1990s.

Over the years, Tiffany has continued to train with Mark - most recently to fulfil her dream to learn about side-saddle restoration and manufacture thanks to a QEST (Queen Elizabeth Scholarship Trust) bursary in 2012.

“I once made a belt holster for a packet of Polos,” she says. “It was for a little disabled boy who liked to give the ponies a reward after his riding lesson. That was really special.”

Mainly based at EJ Wicks in Lambourn, Tiffany can be repairing a 600gram racing saddle one day and an enormous side saddle the next.  She also has a “hobby workshop” on a local farm.

“I enjoy using that space for my own projects including running workshop open days for leathercraft enthusiasts. I love passing on knowledge to others,” she says.

During her time in the industry, Tiffany has seen it become more technical. “We’re more educated and aware of horses’ physiology and are now applying that concept to the saddlery items we make.

“We have had to become more client facing too. We’re no longer the grumpy craftsman in the back workshop.”

Nominees for the ETN/SMS Bench Saddler of the Month award can work in a factory or workshop setting, for an employer or self-employed. They must be SMS members.

To nominate a bench saddler (or more than one) email editor@equestriantradenews.com and tell us why this person deserves to be recognised. Please include the saddler’s name and where they work too.