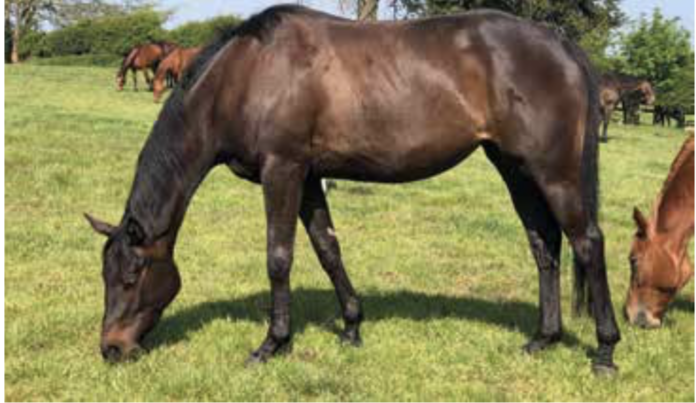 Whilst it is not a nutrient per se, fibre is a very important part of a horse’s diet. Therefore, understanding what it is, how it is utilised and the sources of fibre available, will help you to provide thorough nutritional advice to horse owners.

Fibre is a term used for carbohydrates found in the cell wall portion of a plant. They are often referred to as structural carbohydrates because of their contribution to the shape and strength of the plant.

Fibre is a polysaccharide, consisting of long chains of sugar molecules. The sugar molecules are bound by β-linkages (fig. 1) which cannot be broken down by the enzymes in a horse’s small intestine.

HOW IS FIBRE DIGESTED BY THE HORSE?

As fibre cannot be digested in the small intestine of the horse, it passes through to the hindgut (caecum and large colon) where it usually remains for between 48 and 72 hours. During this time fibre is fermented by microbes, which live in a symbiotic relationship with the horse. The microbial population involved consist largely of cellulolytic (fibre-digesting) bacteria but also includes fungi, protozoa and phages.

THE BENEFITS OF FIBRE

Fibre is essential for maintaining a healthy and efficient digestive system, with the ideal pH in the large intestine near to neutral (approximately pH 6.8).

Hindgut fermentation is a continuous process and produces volatile fatty acids (mainly acetate, propionate and butyrate) which can be utilised by the horse for energy.

As well as providing energy, some vitamins (vitamin K and the B vitamins) are produced during this process. Heat is also generated, as a by-product, which isbeneficial to the horse in cold weather conditions.

Fibre plays an important role in hydration, as it holds a large volume of water in the hindgut of a horse, along with electrolytes. This acts as a reservoir for the horse to draw upon when required.

HOW MUCH FIBRE SHOULD A HORSE RECEIVE?

Most horses should consume between 1.5% and 2.5% of their bodyweight in forage per day. For example, a 500kg horse should have a daily intake of between 7.5kg and 12.5kg, on a dry matter (DM) basis. In many cases this intake should largely consist of grass and hay/haylage, with small hard feeds to balance the diet and meet all nutrient requirements for maintenance, work or breeding.

In practice, this means that most horses should have access to ad-lib forage; all horses certainly should not stand for longer than 4 to 6 hours without forage available.

THE PROBLEM WITH INSUFFICIENT FIBRE

If the amount of forage a horse receives is overly- restricted, and he stands for longer than 6 hours without forage available, the cellulolytic bacteria start to die off and acidogenic (acid-producing) bacteria multiply. This ultimately results in hindgut acidosis. Feeding excessive amounts of sugar/starch, sudden changes in diet and stress can also cause or contribute to this problem.

Insufficient long fibre in the diet also reduces chewing time which not only leads to boredom, and associated negative behaviours, but reduces the amount of saliva produced. In consequence the risk of gastric ulcers is increased, not least as saliva acts as an acid buffer in the stomach. Extended periods of time when the stomach is empty, further increases the risk of ulcers.

WHICH FIBRE SOURCE IS BEST?

The most appropriate forage type will vary according to a horse’s condition, the exercise he is doing, his age/teeth and any other problems, such as ‘fizzy’ behaviour, PPID (Cushing’s), Insulin Dysregulation (ID/EMS), laminitis or a respiratory allergy.

The type of fibre within
a forage influences its nutritional value and therefore, the situations where you would recommend that forage type. Not all fibres passing into the hindgut are fermented equally. Of the fibre reaching the hindgut, pectin is believed to have the highest digestibility followed by hemi-cellulose and then cellulose. Lignin is not at all digestible.

Horses have evolved to spend 16 to 17 hours per

day grazing and maximising time at grass can benefit a horse’s physical and mental health. Grass is also the most economical fibre source available to horse owners.

The nutritional quality of grass can vary significantly and is affected by factors such as the species of grass, maturity of sward, soil type, stocking density, environmental conditions and field management e.g. fertilisation.

Grass early in its growth cycle (i.e. spring) tends to be of high nutritional value, with a higher protein, Digestible Energy (DE) and NSC but lower fibre content. This type of grazing would usually be desirable for underweight or hard-working horses, broodmares and youngstock.

As grass matures its fibre level increases, whilst the sugar, protein and DE drops. This makes it more suitable for horses prone to weight gain or those suffering from PPID, ID/ EMS, laminitis, over- excitable behaviour, gastric ulcers or ‘tying-up.’

Haylage is conserved cut grass. It is baled with a higher water content than hay (approximately 40% and 20% water respectively). Haylage is generally more nutritious than hay, although it does depend on the type of grass used and the time of year it is cut e.g. an early-cut ryegrass haylage will probably be of higher nutritional value compared to late-cut high-fibre haylage.

It is now thought that haylage contains more sugar than previously believed because fermentation is often only partial. However, it has been found that the insulin response to haylage, compared to hay of similar NSC, is greater. For horses prone to laminitis, particularly with ID/EMS, as well as good-doers and those with gastric ulcers, appropriate hay would usually be preferable.

Haylage may be more appropriate for horses suffering from respiratory issues such as equine asthma (RAO/COPD) or when dental function first starts to decline. However, horses quickly struggle to chew haylage effectively and alternative fibre sources (ultimately, pre-ground fibre) will be needed.

Like haylage, the type of grass that is cut for hay, and the time of year it is cut, will influence its fibre, sugar, calorie and protein content but hay has a lower water (and therefore, higher dry matter) content than haylage.

Early-cut ryegrass hay would be more suitable for poor-doers, hard-working horses, pregnant mares
or growing youngsters. Whereas, late-cut meadow hay would be better for good-doers or those prone to laminitis. Hay can also be soaked to reduce its nutritional value further if needed.

Straw is a fibre source with the least nutritional value due to the high proportion of lignin. It should not be used as a horse’s (unlike donkeys) only fibre source but can partially replace some hay/haylage/grass as part of a weight-loss regime. When highly nutritious haylage cannot be avoided, some straw can be used to balance fibre intake and reduce the likelihood of loose droppings.

If a horse is unable to chew effectively, straw should not be used as this will increase the risk of impaction colic.

There are different types of short, chopped forage available. In most cases, they are fed in limited amounts as a mixer chop, so do not make a significant contribution to a horse’s fibre intake. However, there are some circumstances where certain types of chop are more appropriate.

For horses that are no longer able to chew hay, haylage or grass chop effectively, sources of fibre which are already ground will be needed. The best options include high-quality fibre cubes, which can be soaked, or a high-fibre mash. Other fibre sources which can be soaked, include unmolassed beet pulp and grass nuts.

TopSpec can be contacted, free of charge, on their BETA Multiple Award- Winning-Helpline Tel: 01845-565030