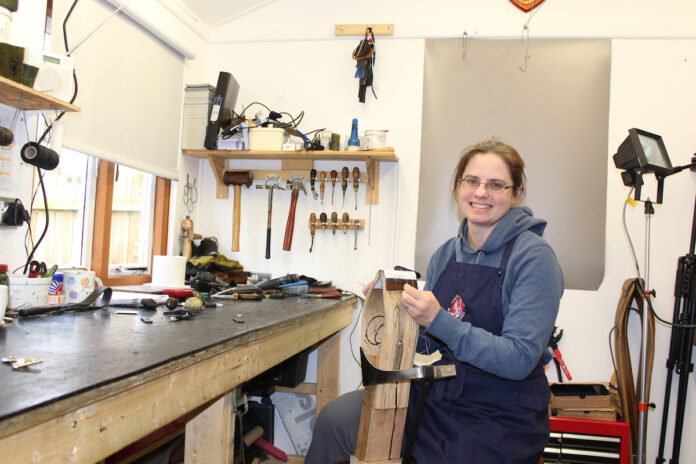 Meet the modest but talented saddler who makes bridles for Charlotte Dujardin’s horses.

Issi Russell has been named ETN/SMS Bench Saddler of the Month.

Issi was nominated by Dee Silman who says: “Issi has long believed that bridle-making skills should be recognised in their own right. So as a member of the SMS executive committee, she campaigned for Master Bridle Maker status to be introduced by the society.

“Issi is a Master Saddler. Her work is second to none, both in design and quality.  She has made bridles for Carl Hester, Zara Phillips and Charlotte Dujardin.

“She’s also is a great example of how you can become an independent business-woman in the saddlery industry. She should be proud of her achievements.”

Leatherworking is in Issi’s blood. Her maternal great-grandparents sold cars; she making the leather hoods, he doing the mechanics. Her paternal grandfather ran a gloving factory.

Born and growing up in London limited Issi’s exposure to horses. But by the age of ten, she’d badgered her parents into taking her for riding lessons.

Inspired by what she saw in the tackroom at her Dulwich riding school, Issi spent much of her early teens making miniature tack for her model horses.

After school one day, Issi went to a Cordwainer’s College open evening in Hackney. Here she met David Corner who was representing the Saddlers’ Company. Recognising her enthusiasm, David invited Issi to the Annual Saddlery Competition which happened to be the following week.

“I met some very helpful people there, and was stunned by the work on display,” recalls Issi. “I got quite emotional about how I just wanted to learn enough to be allowed to enter.”

With her parents unsure she should specialise so young, Issi went to an agricultural college to gain NVQs in horse care.

But leatherworking still called. The year 2000 saw her join Cordwainer’s at Capel Manor College – and realising her dream of entering the National Saddlery Competition.

A summer job with Laurence Pearman at Stroud Saddlery led to an apprenticeship. “I made my first shaped headpiece bridle while with Laurence,” recalls Issi, who went on to become a Master Saddler.

She’s been self-employed and specialising in bridles since 2014. “I just love making bridles, I never get bored with them,” she says. “I have recently rediscovered a love for rolling; it’s only taken 21 years to feel that way!”

Issi says her biggest achievement is making Valegro’s bridles, adding modestly: “It was a case of right place, right time. I’m so proud to have been a part of his journey.”

Unusual commissions include refurbishing a pair of Campaign chairs and a bridle with real rose-gold plated buckles.

“At college, we were visited by the Queen Mother. The floristry department made two moss horses and I made the little saddles and bridles for them,” says Issi.

She and fellow saddler Line Hansen also made pair of headcollars as gifts for the royal guest.

Workshop in the garden

Today, Issi works from her South Cotswolds home in a specially built 12 sqm cabin in her garden.

She creates the majority of customers’ bridles via mail order, sending trial bridles out and working from photographs. She also does local yard visits.

“When I first entered the industry, it was all about saddles and fitting,” she says. “While training, I became more aware of bridle fitting and saw an increase in ‘comfort’ styles.

“Patent and crystals became popular and now, with matchy-matchy, one has to have a matching browband.”

As more bricks-and-mortar shops fall prey to online shopping, Issi is concerned there will be fewer saddlery apprenticeships available.

“The Master Saddlers who once took on apprentices are now working from home in small workshops and not taking them on as before.

“More imported tack also affects this,” she adds. “50 years ago, everything was hand-made and therefore worth repairing – traditionally the apprentice’s job.

“With imported bridles, the leather is not good enough to repair and the stitching just falls apart. I recently saw one of my bridles which had been hammered on a professional yard for ten years, and the stitching is still perfect.”

Unsurprisingly with workmanship like that, there’s a six-month waiting list for one of Issi’s bridles. “I’m thankful to my customers who keep coming back. I’m certainly kept busy,” she says.

Away from the workshop, Issi is mummy to a nearly-three-year-old with whom she loves to go walking, to the park and for days out.

Everyone is invited to nominate bench saddlers they feel deserve to be named ETN/SMS Bench Saddler of the Month. Candidates must be SMS members. Send your nominations to editor@equestriantradenews.com and tell us why this person deserves to be put in the spotlight.