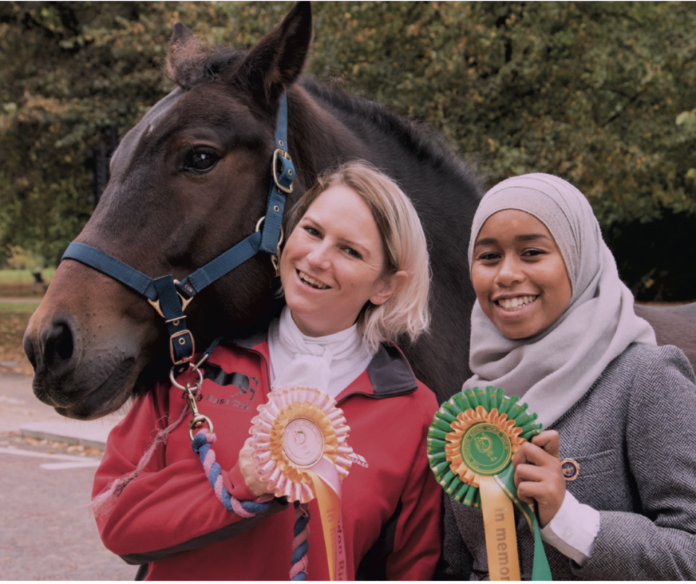 Why an equestrian manufacturer was right behind a headline-making jockey.

The team at Horslyx had special reason to cheer last week when Khadijah Mellah became the first woman to ride in a British horse race wearing a hijab.

The company has for the past year supported the Ebony Horse Club in Brixton where the 18 year old learnt to ride.

As a young Muslim woman, Khadijah’s participation in the Magnolia Cup was always going to make headlines. But her win aboard Haverland in the ladies’ charity race at ‘Glorious Goodwood’ even made the 10 o’clock TV news.

“The Ebony Horse Club Charity may be in one of the most disadvantaged inner city neighbourhoods in the country,” said Gillian Wardle of Horslyx.

“But in this small oasis, tucked away between railways and towering blocks of flats, children are taught life skills, confidence levels are buoyed and opportunities are provided that they could once only dream about.

“Horslyx have proudly supported Ebony Horse Club Charity for the past year and fully believe in the transformative power of horses.”

Although Khadijah has ridden regularly, the first time she sat on a thoroughbred was two months ago, followed by an intensive course at the British Racing School.

“Khadijah rode brilliantly to win on Haverland,” added Gillian. “Horslyx would like to congratulate her; we’re sure this will bring more success to other members of the Ebony Horse Club.”

• Find out how Horslyx are made in Britain. See the August issue of ETN.