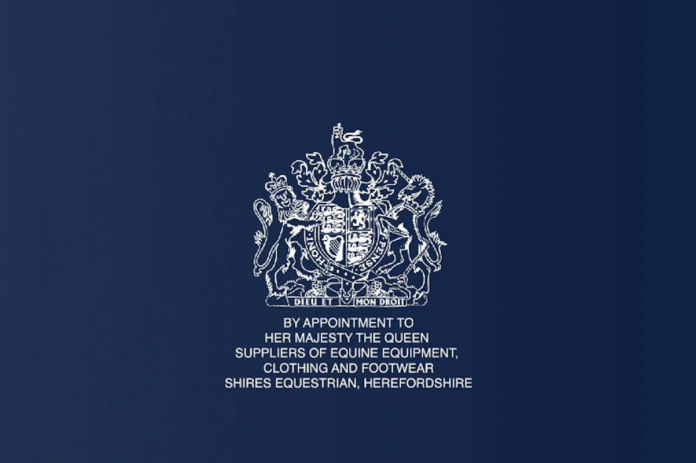 What happens now for companies who supply the royals?

Unsurprisingly, given our late Queen’s love of horses, a healthy number of equestrian companies are Royal Warrant holders.

In the immediate aftermath of Queen Elizabeth’s death, companies may continue to use the Royal Arms in connection with their business for up to two years.

“The Royal Household is due to review Warrant grants upon a change of the reigning Sovereign and so we cannot enter into speculation at this time,” Russell Tanguay of the Royal Warrant Holders’ Association told ETN.

A Royal Warrant of Appointment is a mark of recognition for companies who have supplied goods or services to the royal households for at least five years.

There must be an ongoing trading arrangement, with goods or services supplied on a commercial basis.

Shires Equestrian has been a Royal Warrant Holder to HM The Queen for the supply of equine equipment, clothing and footwear since 2009.

“Having the Royal Warrant elevates us in terms of the overall image of our company and the quality of our products,” says Shires’ chairman Malcolm Ainge.

“It adds a certain prestige that money cannot buy. Being able to exhibit our products in the gardens of Buckingham Palace for the Coronation Festival in July 2012 was an incredible experience. 7,000 visitors attended for three days from all over the world.”

Royal Warrants must be renewed every five years, something Malcolm thinks may become increasingly challenging for some due to sustainability requirements.

“Probably to be a warrant holder to HM The King will be even more difficult due to King Charles’s environmental ethics,” he says.

Neither are Royal Warrants a ‘free lunch’. “We received a letter from Buckingham Palace advising us that a Warrant had been granted, and a few days later an invoice from the Royal Warrant Holders’ Association for membership,” added Malcolm.

“However, the annual fee is realistic for membership of such a prestigious organisation.”

Feed for the royal studs

Environmental criteria are of huge significance to another Royal Warrant holder from the equine feed sector, Dengie.

“[We] greatly value holding a Royal Warrant as it recognises companies that operate to the highest standards of quality and service in a sustainable way,” said a spokesman for Dengie.

“Should King Charles III wish to grant us with his Royal Warrant in the future, we will be honoured to continue to supply feed to the royal studs.”