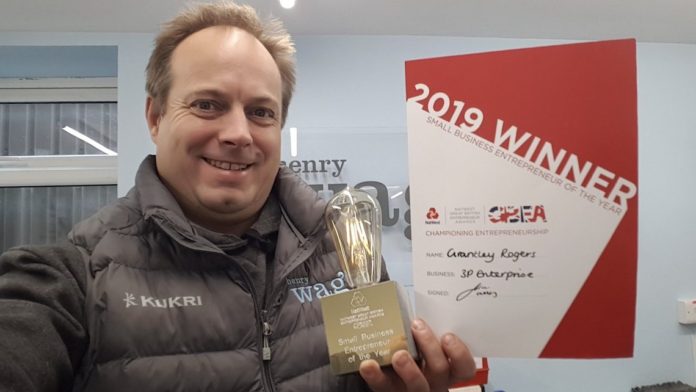 Grant Rogers, managing director of 3P Enterprise and founder of the Henry Wag pet and equine brand, has been named Small Business Entrepreneur of the Year for the south-west.

The accolade was presented at the Great British Entrepreneur Awards ceremony in Exeter last month (24 October).

The Gloucestershire based business owner now goes forward to the national finals in London on 21 November.

The NatWest sponsored awards, now in their seventh year, celebrate entrepreneurship across Great Britain. The finalists in the south-west region were selected from an initial entry of more than 3,000 businesses.

Grant Rogers started his business in 2002, building wooden dog kennels in his garage.

He began importing pet products from US manufacturers and, in 2007, secured the UK distribution rights for the Petmate brand which he began selling to other retailers.

Six years ago, Grant developed his own Henry Wag range of pet accessories to meet the needs he experiences as a rural dog owner.

The microfibre towels and drying gloves have also proved popular with horse owners.

"Winning the trophy was a real surprise for me, especially given the strength of the other finalists,” said Grant after collecting is award.

“I made it an objective at the start of this year to put our products and business forward for some awards with the aim of raising the profile of the business and achieving some recognition of what we are doing here at 3P Enterprise.”