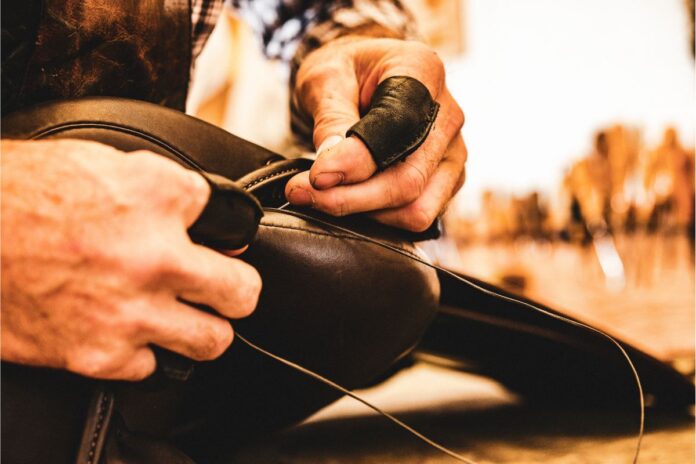 Award winner has seen many changes in our industry.

Penny Dickson has been named ETN/SMS Bench Saddler of the Month for November.

Penny was nominated by Mark Romain of the Saddlery Training Centre, who says:“I first met Penny in the early 1980s when we had both entered the National Saddlery Competition.

“A decade later, she came to the Saddlery Training Centre to attend a traditional collar making course with Tony Byrne and made a lovely show collar.

“Penny has done very well in small business saddle making classes and side saddle manufacture. Her work is always of the highest standard.”

Penny’s mother was a ceramic artist who worked in the theatre doing wardrobe and props.

Penny grew up helping her to make things and learning to sew from the wardrobe team. “I can remember making a God costume when I was about eleven,” she recalls.

“At school, my best subjects were needlework, pottery and metalwork; I had a go at lots of different crafts. As a teenager, my bedroom was my workshop.”

Although from a non-horsey family, Penny was allowed to have riding lessons “after a degree of pestering” when she was ten. “That was it, I was hooked,” she says. “A Saturday job at the local stables followed, then I worked in a yard for a year.”

A chance remark set Penny on a career in saddlery. “I used to make ribbon covered browbands and numnahs, and do simple re-stitching jobs for the riding school,” she explained.

“When I was trying to decide whether to go into horses or the theatre, someone said 'why don't you just go and be a saddler as you are always making things for the horses’ and it seemed like a good idea.”

In a bid to get an apprenticeship, Penny wrote to saddlers all over England. “Luckily Ron Hinton had just taken on the workshop at Canterbury Saddle Centre, and offered me a place,” she says. “I’ve worked in the trade ever since.”

Saddles are Penny’s speciality and favourite thing to create. “They’re what I wanted to do right from the start, and still love to make. I only do made-to-measure to order, so each saddle is unique for each horse and rider.”

Penny is most proud of her saddle that won the Small Business Saddle Class at the SMS National Competition in 1986. “It was the first time I had won there and I beat some very good saddlers, I was a bit chuffed with myself for that,” she recalls.

“I’m also rather proud of the tack our horses wear. It's rather nice when people admire it and ask where we got it from - and to be able to say 'I made it, thank you.’

Penny’s continued enthusiasm for her craft shines through. “I really enjoy the fact there’s always a new challenge to make, something new to learn and new horses and riders to meet,” she says.

“It's great to see smiling faces on the horse and rider when you have made them a saddle and/or bridle. It’s especially the case when it’s a horse that has been difficult to fit and everyone is pleased with the result and outcome.

When it comes to things she doesn’t enjoy quite so much, Penny names making lip straps, replacing zips in boots - and finding live creepy crawlies hiding in items to be repaired. “They make me shudder,” she confesses.

Penny is happy to tackle unconventional commissions. “Over the years, I’ve made a lot of unusual items which get the brain ticking.

“The ones that stick in my mind are leather washers for the toilets on a ferry, a leather ceiling and walls for an army truck that was being converted to a luxury camper van, caveman deerskin boots and strange assorted leather bits for vintage vehicles ranging from push-bikes to steam engines.”

Today, Penny is self-employed and has her own workshop near Sandwich in Kent.

“I only do made-to-measure and repairs/restorations, but will take on most things so long as I think it’s do-able. I quite like a challenge,” she says.

She’s seen many changes in the trade during her career. “When I started, synthetic tack was rare, but now it’s normal, as are adjustable trees.

“Women are now happily accepted as saddlers. But we used to be very much the minority. And I would never have thought so much bling and bright colour would have made its way onto saddles and bridles.”

Away from the bench, Penny enjoys spending time with her horse, Bailey. More unusually, she’s a field archer and horseback archer, as well as a National Field Archery Society coach.

“I practice Tai Chi and Equestrian Tai Chi for which I am a Level 1 Instructor. And I have a passion for equestrian theatre, costume concours and horse agility,” she adds.