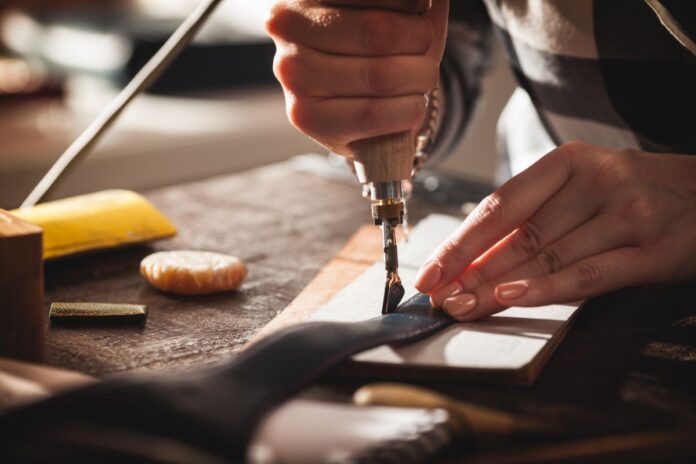 Award winner gives us a glimpse behind the scenes at the Royal Mews.

Kirsty Thomson has been named ETN/SMS Bench Saddler of the Month for October.

The award, presented in conjunction with the Society of Master Saddlers (SMS), recognises those who uphold the highest standard of leathercraft skills.

Kirsty was nominated by Master Saddler Frances Roche, who says:

“Kirsty came to the Royal Mews eight years ago as an apprentice, sponsored by the Worshipful Company of Coachmakers and Coach Harness Makers.

“She’d already been a student at Capel Manor College for two years and arrived with good saddlery skills.

“Kirsty’s skills have continued to flourish, winning her many prizes in the SMS National Saddlery Competition.”

“I didn’t enjoy sitting behind a desk”

At school, Kirsty loved practical subjects. “Anything that didn’t involve being stuck with pen and paper sitting behind a desk,” she recalls.

So, it’s not surprising that of her three A levels - psychology, business studies and textiles – it was the latter into which she put most time and effort.

“I could be creative. I enjoyed being given a brief and having to make something to fit in. I guess I didn’t really see it as a gift, just something I could be good at,” she says.

Weekly riding lessons from the age of six progressed to helping look after the school’s ponies. Kirsty’s hobby then prompted her to consider a horse related career.

“I didn’t like the look of many of the options,” she confesses. “Then I fell upon an article mentioning the saddlery course at Capel Manor and it grabbed my attention.”

A two-year course was followed by an apprenticeship with the Royal Mews on London.

“I spent three years partly furthering my saddlery skills and partly learning carriage restoration,” she explains. “I’ve been at the Mews for eight years now, and have recently upgraded to Master.”

Kirsty struggles to name her favourite thing to make because “so many pass through the workshop”, although she has a liking for laced reins.

She’s most proud of the set of harness she made as her final project for her apprenticeship. “It was the first complete matching set I’d made and it’s used by Lady Louise [Windsor] for the French pony chaise,” says Kirsty.

What Kirsty likes best about working with leather is “the endless possibilities and skills that can be learnt and combined to create items.”

The worst, she says, is the making of hame tugs [part of a harness]. “There are a lot of layers of leather to get through!”

Her most unusual creation was some animal doorstops - including pigs, elephants and dinosaurs.

Life at the Mews

Kirsty is based at the Royal Mews workshop which looks after all the harness, bridles and saddles for the King’s carriage horses. Some leather items on the carriages also require the saddlers’ attention.

Based mainly in central London, Kirsty and her colleague Catriona Coppens are sometimes required to go to Windsor Castle.

“So many different items come into our workshop, one day is never the same as the next,” she says. “The state harness is very intricate and requires a lot of patience with the stitching patterns and embellishments.

“The exercise (everyday) harness is quite plain in comparison but still requires a great deal of maintenance. We’re never short of work!

“We’re always looking for ways to make the harness and bridles more comfortable for the horses, often having to think outside the box. The work is so varied and many skills are required, I’m still learning eight years on.”

During her time in the industry, Kirsty has seen many saddlers become more willing to share knowledge and tips.

“With all the social media, online groups and SMS initiatives, there’s a wealth of knowledge available at your fingertips,” she says.

“As saddlers, we’re are always looking for ways to make items for the horse more comfortable. And advances in technology and materials have definitely helped in recent years.”

When she’s not busy with work, Kirsty likes “a bit of peace and quiet” and a good book. “If I lived closer to a beach, I’d be down there most evenings,” she adds.