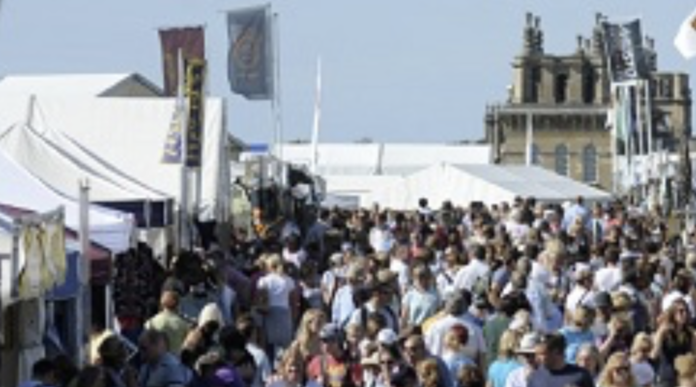 You should always know your place. I always realise that, if nothing else, at Blenners.

Elsewhere - Badders, Brammers and Burghley - the great house is there in the background. Often the cross country course runs close by it, but at Blenners it’s only ever the fourth side of the arena; a backdrop to the event’s action, static, distant and aloof.

The layout of the tradestands - two parallel rows leading up the hill - seems to emphasise that. It’s as if the punters are channelled up and down the slope to appreciate the view rather than having a good wander about smaller blocks in search of what’s on offer.

These thoughts were prompted as I watched the passing pound pass by on the up-and-down drag during the last few days of summer and the first day of autumn.

Don’t get me wrong, for me Blenners was only a bit down on last year; but you had to work to get it, and the layout really doesn’t help. Nor did the weather - Thursday and Friday were good but quiet, Saturday saw a decent crowd in but was way too hot for most to bother about shopping with the call of the barbecue emptying the site early.

Sunday started well, but the weather forecast was all too accurate and by mid-morning the rain rolled in, lasted through to lunch, then returned at 3 o’clock to kill things off.

Overall, I wondered whether I should have come back after last year. Quite a few chums didn’t and it makes you think.

The problem is that Blenners isn’t Burghley or Badders. It’s a horse show, not a shopping centre or a must-go-to social event. It had the best competitive field for a number of years, and the crowds rolled in to watch - about 60,000 of them according to the show guide.

On Saturday, admission was £28 per punter. Car parking was an additional £8 per vehicle, £20 for forward parking. So a family of four with teenaged kids has spent at least £120 to get in, and if they didn’t bring a picnic will get fried for another £50 or so for lunch and a couple of coffees. Doesn’t leave them much margin for the suddenly seen must-have.

The weekend before set up, the news was full of reports that someone stole a gold toilet from the palace. I had a good look, but the only available facility was the usual plastic portaloos. With those numbers getting in at those prices, I’d have an 18ct gold loo too.

As the outdoor season draws to a close, I suppose my musings are really about risk and reward. Mostly, that’s what drives what we do in business.

Aside from the steady sellers, I take a punt on new or different lines. If they go well, I do well. That governs how much I risk on them.

But in a season where economic uncertainty and weird weather have definitely impacted my business, it’s beginning to look as if the event organisers have left me with the risks - even increased them by thinning the punter’s passing pocket - but trousered the rewards.

If the tradestands really are an essential part of an event, then that needs to be reflected in the costs of taking one. This should be a shared enterprise, not another revenue stream.

I have some serious thinking to do over winter about where I go next year. I have to think about my place at various events and in the bigger picture. Maybe the event organisers should think about theirs.